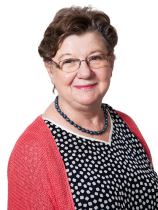 I should begin this post by saying that Catherine Kullmann has become one of my favourite authors. Her Regency stories are always well researched, well written, and well edited. My introduction to Catherine’s work was Perception and Illusion, reviewed here. Her brief autobiographical notes explain clearly why I was originally drawn to her writings. Recently I read The Murmur of Masks and couldn’t wait to share it with those of you who love good historical romances.

It is 1803. The Treaty of Amiens has collapsed and England is again at war with France. Eighteen-year-old Olivia must say goodbye to her father and brother, both of whom are recalled to active service in the navy. Not long afterwards, her mother, who has been her anchor all her life, dies suddenly. As a result, she loses her home. Adrift and vulnerable, she accepts the offer of a marriage of convenience from Jack Rembleton, an older man whose brother, Lord Rembleton, is pressuring him to marry and sire the heir to the title Rembleton has failed to provide. Olivia hopes that love will grow between them, but Jack’s secrets will prevent this and Olivia must learn that she has thrown away her youth and the chance of love.

When Luke Fitzmaurice, a young man prevented by ill-health from joining the army, meets Olivia at a ball, he is instantly smitten but she must tell him she is already married. Ten years pass, during which each faces up to life’s challenges but then fate throws them together again. Olivia is finally free, but before they can explore what might be between them, Napoleon escapes from Elba and Luke, who is determined this time not to be found wanting, joins Wellington’s army in Brussels.

They say: “I read it very quickly as the story was very compelling and the characters really came to life and engaged me.” “Depicts both the harsh reality of the battlefield and the pleasures and challenges of society life in England.” “I was hooked from start to finish.” Winner of a Chill with a Book Award.

One of the joys of writing historical novels is that you have an unimpeachable excuse to rummage in flea markets, second-hand book shops, antique fairs, and curiosity shops. My books are set in the extended Regency period from 1800 to 1830 and I was amazed to discover the wealth of coloured contemporary illustrations of the period over and above the portraits and architectural prints I had expected. Print shops selling cartoons and caricatures thrived, and ladies’ journals published fashion plates and engravings of eminent persons in each issue. In addition, publishers had progressed beyond the usual frontispiece to produce lavishly illustrated books that are the forerunners of today’s graphic novels. I have chosen five of these illustrations to take you on a tour of London from the lowest dive to the Prince Regent’s court.

And here we see Tom and Bob in Hyde Park, Cutting a Dash among the Pinks in Rotten Row. A ‘Pink of the Fashion’ is a gentleman who is at ‘the top of the mode.’

While Tom and Bob were well-born young men about town, Dr Syntax, the hapless protagonist of at least four volumes by different authors, was a not-so-young curate whose outings tended to end in disaster of some kind. We encounter him and his wife at Vauxhall Gardens, holding up a slice of the ham that was famous, or infamous, for its thinness, which inevitably led to a steep bill at the end of the night.

Before them soon was laid a slice
which some might think was very nice,
But through whose thin, transparent fold,
You might the distant stars behold,
Was not much better than a jelly;
Another, and another still,
Must feed the craving ivory mill,
And still to every keen performer
“The last is welcome as the former.”

We next visit a fashionable ball. In this illustration from The Adventures of a Post-Captain, you can just see the dancers in the background at the top left, but all attention is focused on the pink sofa where our hero woos his lady, ignoring the envious glances of others less favoured. The text beneath it reads:

The maiden listen’d, blush’d and look’d,
As she would have the words rebuk’d
But there was something in her eye.
Which seem’d to give the words the lie. 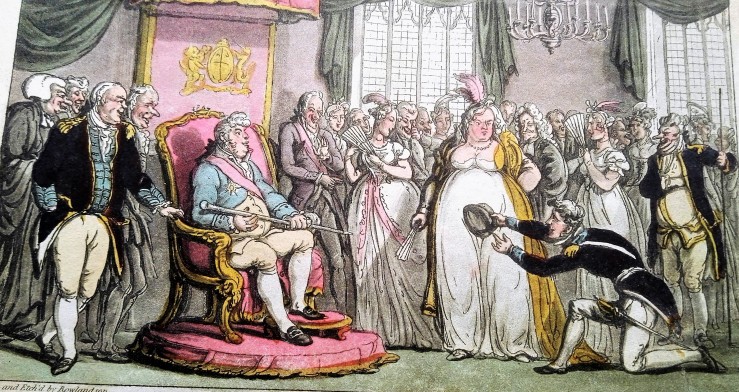 Finally we attend a levée at Carlton House, seat of the Prince Regent, where Johnny Newcome, fresh from the Campaign in the Peninsula, presents him with the Trophies of Battle. Although our hero is fictional, this scene alludes to the retrieval of the baton of the French Marshal Jourdan from the abandoned coach of Napoleon’s elder brother Joseph Bonaparte, whom Napoleon installed as King of Spain in 1808. Joseph made a desperate attempt to escape Wellington’s advancing army in 1813, losing almost all his baggage in his headlong flight.  The baton was given to Wellington, who sent it to the Prince Regent.

To me, these prints and their accompanying text open a window on the real Regency. Perhaps it is because they were created with no thought to posterity that they are so appealing two hundred years later. Their vitality and immediacy invite us to step into their world, and I for one cannot resist.

Nor can I, Catherine!!

This story opens heartbreakingly sadly. Young Olivia suffers the loss of her beloved mother, and inasmuch as her father and brother are off fighting the interminable war with France, she is left on her own with disappointed hopes. In Regency society, being without male protection translates as being quite vulnerable. Fortunately her uncle steps in to help. He approves when an acquaintance asks for Olivia’s hand in marriage. Unfortunately, neither Olivia nor her uncle are aware of who and what this acquaintance really is, what are his motives, and where his heart is truly engaged, setting Olivia up for a sad and loveless marriage of convenience.

After she is married she meets the man of her dreams. Altho’ he is a bit of a rascal (or maybe because of it!), I fell in love with Luke almost from the moment I “met” him. Illness prevents him from fulfilling his dream, as a second son, of joining the military, and he lives a rather dissolute life as he is also set adrift by his own disappointed hopes.

Ultimately, of course, they are both free to marry and enjoy a life of happiness together. Getting to that point, however, is not an easy straight line. The many twists and turns of their relationship are the stuff of this intriguing story, a story I could barely put down once I had started it.

There was so much I liked about this book that I hardly know where to start. Perhaps with the clever references to Pride and Prejudice? I’ll leave it to you to make these delicious discoveries for yourself.

Then there were the engaging characters and situations. All had the ring of reality to them, and I was pleased to be sharing their lives with them. One situation, and character, I had already been introduced to: Lallie Tamrisk, the star of Perception and Illusion, makes a cameo appearance, and I was happy to see her again, in a shocking scene touched on in P&I and featured in the 1972 movie Lady Caroline Lamb. Then I realized that P&I was written after TMoM. So now I wonder if Lallie simply grew into a larger role in P&I, and if we’ll see her yet again in Catherine’s next book? (Hint hint, Catherine!)

The new-to-me Regency words and expressions, as well as the general Regency history, that I learned here.

The vividly detailed description of The Battle of Waterloo. We who have never seen war close-up know events such as these simply as ticks on the timeline of history. To Luke and the other participants, however, they were far more personal, and even tho’ I admit to skipping some of this difficult reading, I actually found myself having nightmares about this nightmarish battle.

If you enjoy well-researched and well-written historical novels incorporating a not-always-tender love story with a happily-ever-after ending, you will surely enjoy reading The Murmur of Masks.

I give it an enthusiastic five-star rating:

To learn more about Catherine Kullman and her writings, and for lots more treats and goodies, visit her website.

Your comments, as always, are most welcome!

And … if you haven’t already got your copy of Desperate Hearts, you can order a kindle copy here. Now also available on kindleUnlimited.

One thought on “The Murmur of Masks, and a tour of the Regency, by Catherine Kullmann”