While I enjoy watching film versions of Jane’s novels, especially Pride and Prejudice, and reading JAFF stories, I do have to admit that I cringe a little each time the characters “have tea.” Because “having tea” as we know it simply did not exist in Jane’s time.

Most people in the upper classes in England (and, to some extent, America) partook of two meals each day: breakfast, which was generally served mid-morning, and then dinner in the late afternoon. By the early 19th century breakfasts were evolving from heavy meat-laden meals – often left over from the previous day’s dinner – to a lighter repast. As there was no formal mid-day meal served, during the rest of the day people did a good bit of snacking when they were hungry, or when they received callers. Wine and cake was a popular offering, as was bread and butter with tea, coffee, or chocolate, depending on what was available.

Some hours after dinner there might be a light supper, mostly consisting of soup or leftovers from dinner as well as cakes, bread and butter (which was quite popular at any time of day), and various beverages. There might be tea, altho’ it was just as likely that coffee, ale, wine, or hard liquor would be served. (Alcoholic beverages were quite popular too!) People would generally retire shortly after supper.

When gaslight was later introduced in England in the mid-19th century, people had more opportunities to engage in social events in the evenings. The upper classes had gas laid on at their homes too, and could thereby entertain until later hours.  Dinner would be served later and later, and if a supper was served it would be quite late in the evening. This was, however, well after Jane’s time.

In the late 18th and early 19th centuries, tea was still relatively costly and, due to political problems with China, was at times difficult to obtain as well as outrageously expensive. While tea was still served in the finest houses – because they could afford it and wanted everyone to know it – if coffee or chocolate was better available then these beverages might be served instead. And of course wine, ale, liquor, or punch.

Additionally, during this time tea was often adulterated to “improve” it so it could be sold for more profit, or it was sold and re-used – or both. Here is a list of some of the rather disgusting substances used to adulterate tea. Mrs. Reynolds, like many housekeepers of her time and station, likely saved spent tea leaves and sold them to tea brokers to be dried and sold for re-use. Used tea was generally purchased by the lower and working classes. At the same time, housekeepers in upper-class houses had to be careful that the tea they purchased for their employers’ use was unused and unadulterated. Serving tea could be a rather dicey affair in Jane’s time.

There was no actual tea meal during this period. If you read carefully, tea as a meal is not mentioned in Pride and Prejudice. Altho’ Lady Catherine invites the Collinses and thereby Elizabeth Bennet to Rosings to “drink tea,” she never invites them “to tea” as we would think of it. Tea and coffee, along with dessert, would be served after dinner in the drawing room. This was not an actual meal but part of the dinner meal. In Sense and Sensibility, when Sir John invites the Dashwoods to drink tea in the evening, he is inviting them not to a meal but to visit after the evening meal for beverages and dessert. 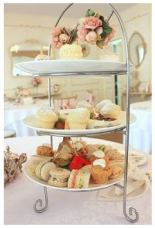 On receiving days, callers might be served tea with bread and butter but were just as likely to be served other refreshments such as wine and cake. If an upper-class hostess wished to particularly serve tea to her guests, she issued formal invitations several days or even weeks ahead of time. These “teas” tended to be rather special occasions.

Today, one finds several tea “meals:” Cream tea, or elevenses, consists of tea with scones or crumpets served with clotted cream and jam. Afternoon tea, also called low tea, is an elegant afternoon snack of scones, small savouries, and bite-sized cakes and pastries. All of us who enjoy afternoon tea know the story of its origins. Lady Anna Russell, Duchess of Bedford, in 1840 declared that due to the length of time that elapsed between breakfast and dinner, she had a “sinking feeling” of hunger and asked that a pot of tea and some cakes be brought to her chambers at around 4pm. She enjoyed this light snack and began to invite friends – including Queen Victoria – to join her. Tradition has it that this evolved into what we now know as afternoon tea. It became an important upper-class social event in late 19th and early 20th centuries.

At the time of Austen, the evening meal, especially for labourers, was called high tea, meat tea (whether meat was actually served or not), or simply tea. It was a hearty meal consumed by working-class people, and while it was usually accompanied by tea it may just as likely have been served with ale or other beverages. This tradition continues to this day. I know women whose husbands and children ask not “what’s for supper” but “what’s for tea?”

I would like to thank Judith Krall-Russo, Food Historian and Certified Tea Specialist, for her graciousness in sharing some of her extensive knowledge with me for this article.

Your comments, as always, are most welcome.

And … if you haven’t already got your copy of Desperate Hearts, you can order a kindle copy here.